In 1985 Dan Fogelberg released the groundbreaking progressive bluegrass album, “High Country Snows” and was touring with his “All-Star Bluegrass Band” featuring David Grisman, Jerry Douglas, Herb Pederson and Chris Hillman. The show I saw from that tour was amazing, but what I remember most from that night in Costa Mesa was the crystal-clean flatpicking of Dan’s relatively unknown acoustic guitarist, introduced as “local boy, John Jorgenson.”  Three years later I would find myself working with Takamine Guitars. Nine years after that, John Jorgenson would become Takamine Guitar’s 3rd signature model artist with two of their coolest models ever, the JJ325SRC and JJ325SRC-12.

In the interim, the versatile Jorgenson was keeping busy recording and touring with acts ranging from Bob Dylan and Bonnie Raitt, to Barbara Streisand and Luciano Pavarotti. But it wasn’t until forming the incredibly successful ‘Desert Rose Band with Chris Hillman (inspired by their newgrass stint with Fogelberg) and his participation in a smoking, electric guitar trio called ‘The Hellecasters’  that the world-class wizardry of John Jorgenson would be revealed to the masses.

I kept track of all of these JJ incarnations and finally met John in 1992 as a member the ‘A’ team house band that performed on many of the TV Music Award shows. He was in need of a good acoustic-electric and was presented with his first Takamine, an EN20 Cedar top satin finish jumbo, which he made good use of. But it was the EF325SRCA, red stained bubinga dreadnaught cutaway that John eventually gravitated to. John became so associated with that red dread that in 1995 Takamine produced a print ad featuring John, his EF325SCCA and his ‘65 Mustang. I always liked that ad – and am still crushed that he sold that car. 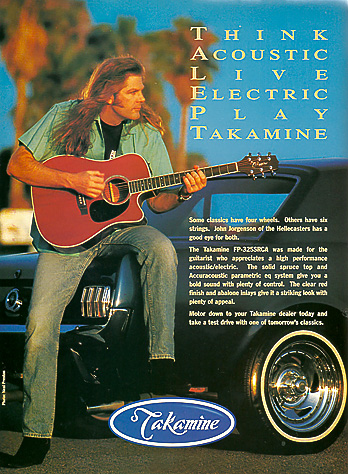 Shortly after that ad was shot, JJ would begin what would become a 6 year gig as a member of Elton John’s touring band. As a result, John was covering more and more acoustic parts that required both 6 and 12 strings, thus needing a 12 that matched his red EF325SRCA.

From there, the leap to matching 6 and 12 string John Jorgenson signature models was a relatively short one. John’s ideas for the retro-cool, white pickguard, 12th fret J.J. inlay and lighter bracing were stylish and practical embellishments that to this day set the JJ325SRCA 6 and 12 string apart both visually and sonically from any other Takamine model.

The credibility John brought to the Takamine brand was what only a guitarist’s guitarist like John could deliver. His influence and fan-base covered as wide a spectrum as his discography. Just when his passion for gypsy jazz has us convinced he’s Django reincarnate, he brings us back to his bluegrass and Desert Rose roots. Once you’re all cozy there, he records a blistering instrumental w/ Brad Paisley that summons his Hellecaster days…and wins a Grammy. If you ever think you’ve finally wrapped your head around JJ’s massive talent, I’ll remind you that his primary musical training…was with reed instruments.

No other artist galvanizes Takamine’s reputation as a world-class professional guitar, like the incomparable John Jorgenson . 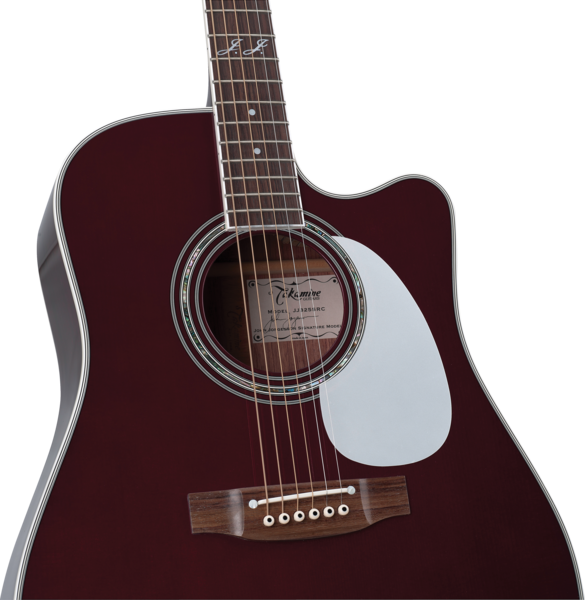